SpinCount has built a record of success based on hard work, dedication to the goals and objectives of the organizations and artists we work with, and through a profound commitment to Canadian music. Moreover, the company pioneered the use of “new media” (social media platforms, internet music outlets, digital music delivery) from early on, and has led the way as the industry adapts to new technologies and the opportunities this presents in an ever changing environment.

We are proud of the relationships we have developed and the successes we helped our clients achieve.  SpinCount works with artists from all across North America and beyond who have secured label representation, showcases and nominations as a direct result of our campaigns. 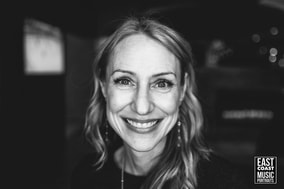 Photo credit: Scott Blackburn
ABOUT FOUNDER KIMBERLY SINCLAIR:
Kimberly Sinclair has amassed an impressive track record promoting and exporting Canadian artists.  Drawing on her background in New York's fast-paced fashion industry, along with a singular ability to bring people together, Kimberly has built SpinCount into an award-winning promotions and publicity firm.

Kimberly has created opportunities for artists by coordinating showcases and events in Canada and beyond, including Nashville, New York City and Kansas City, MO. Kimberly shares her expertise at conferences and events internationally as well and juries for many Canadian Music and Industry Associations, including JUNOs, FACTOR, MNS, ECMAs, MPEI and more. She is a former member of the Music Nova Scotia Board of Directors and was elected by the MNS Board to the executive position of Secretary and appointed as the MNS representative to the Board of Directors for the East Coast Music Association.

The #ECMA2017 Award for Company of the Year presented by @irvingoil goes to @SpinCount!

Company of the Year presented by Enterprise Rent-A-Car goes to @Spincount! #ECMA2018

Music Canada was proud to sponsor the Company of the Year Award at the @musicnovascotia Awards - congratulations to @SpinCount! #NSMW2014